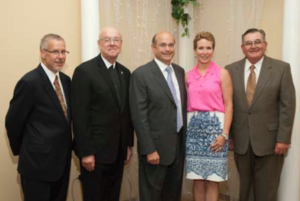 JOLIET, IL –(August 2012) During The Will County Community Foundation’s Annual Donor Recognition and Celebration of Philanthropy donors and guests gathered at the Barber & Oberwortmann Horticulture Center to recognize Ed & Gloria Dollinger and Lewis University and Br. James Gaffney, FSC for their commitment to the Foundation and to celebrate the spirit of giving in Will County.

Board Chairman, Dennis Tonelli introduced the honorees noting that Ed Dollinger’s knowledge of and commitment to the local community have been cornerstones for building The Will County Community Foundation. He was the founding Chairman, instrumental in building our Professional Advisor Council and will be assuming the role of Vice-Chairman in 2013. Ed and Gloria have supported many area nonprofits, and recognize the need for Will County to be served by its own community foundation. They illustrated this belief by establishing a fund to support a scholarship at Lewis University and their own family Donor Advised Fund. Both Ed and Gloria mentioned their shared value of charitable giving. They recognize the importance of modeling it for their children, and appreciate the fact that the Donor Advised Fund would allow them to engage in the process with their children.

Lewis University and Br. James Gaffney, FSC have provided ongoing support of the Foundation as well. Br. James was a founding director, served as Vice-Chairman, headed the Governance/Nominating Committee and will be assuming the role of Chairman in 2013. Lewis University has provided generous and invaluable support through hosting events, Board meeting and other in-kind donations. Br. James shared how a spirit of association, which fosters community in all teaching, learning and service, is fundamental to Lewis University’s mission. Supporting an organization like The Will County Community Foundation is in keeping with their values as an organization.

Kathy Cawley, President of The Voyager Group, took a few moments to share her philanthropic journey with the guests. She and her husband Tom recently started The Voyager Group Donor Advised Fund. They believe in giving back to the community and the Fund will help them meet their personal and professional charitable goals. In addition, they would like to share the process with their clients and have initiated an advisory committee that will provide input into the grant making decisions for the Fund.

Chairman Tonelli recognized, Wayne Klasing and Steve Randich, for their six years of service on the board, as they will be stepping down this September. Executive Director, Michael Trench also took a moment to thank Dennis Tonelli for his dedicated service as Chairman for the past three years. He will be stepping down in September as well. Michael invited guest to share in coffee and desserts.