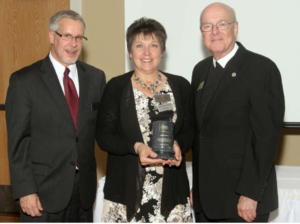 Will County, IL (August 18, 2014) – The people of Will County are always helping their neighbor in ways that are as unique as their fingerprint. No two philanthropic visions are exactly the same. At The Community Foundation of Will County’s Annual Donor Recognition and Celebration of Philanthropy we heard from honorees that shared their visions.

Board Chair, Br. James Gaffney, FSC welcomed guests and introduced Janet Viano. Jan is a lifelong resident of the Will County community. During that lifetime, she has shown a dedication to her professional work in banking, and personally, to improving the quality of life in her community. With forty years as a banking professional, it is no surprise that she has spent the last 30 with a strong community–focused bank, First Midwest Bank, where she is now Executive Vice President, Director of Channel Sales and Retail Banking Administration.

Her volunteer work has taken her in directions that could be defined either as philanthropy, or an interest in developing women’s leadership into the next generation. She has been a part of the Zonta Club of Joliet; a Past President of the Will County chapter of the National Association of Bank Women; a charter member of the New Lenox Rotary Club; and founding Director of First Midwest Charitable Foundation. 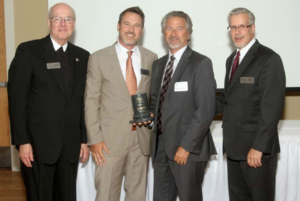 Jan became an early Board member of The Community Foundation of Will County in 2007, and has served as Treasurer of the Foundation for the past several years. During her time on the Board, she took advantage of an opportunity to blend both her driving interests – philanthropy and women’s leadership. A little over a year ago Jan had a vision to create a Fund that would provide resources to support the issues of importance to women leaders today, and to inspire generations to come. With a quick outreach to her colleagues at First Midwest Bank, who matched her gift within an hour, the Women’s Leadership Fund was born, and is now nearing $20,000.

“The Foundation gave me the platform to give back in a more global way,” noted Viano. “Together with my colleagues we worked as a united group to support women’s leadership. We hope this Fund is a catalyst for collaboration to build talent as women continue to be leaders in their families, businesses, and communities.” Jan recognized her parents for instilling in her a philanthropic mindset by modeling the behavior throughout their lives, whether it was baking bread for a friend in need, supporting the local fire department, or helping out at the Men’s Club in Homer Township.

Executive Director, Michael Trench introduced Sentinus, LLC represented by Scott Reynolds and Tyler Qualio by sharing some of the company’s history. “Lieutenant Commander Richard Reynolds returned to Joliet after serving as a ship commander in both the Pacific and Atlantic in WWII. And, once again, he charted new waters, forming an Estate, Business Planning and Insurance Firm, Reynolds & Associates, long before the idea of a comprehensive planning firm came into vogue,” said Trench

Living out his message of business succession and exit strategies for successful entrepreneurs, he later turned over operations of the firm to his son, Scott Reynolds, who with his son-in-law Tyler Qualio and son, Britton Reynolds, run the successor firms of Sentinus for the advisory and wealth management piece; and Premise Capital as an asset management company. “Dick’s death last year in 2013 didn’t end what he started, but allowed his vision to continue through the legacy of his family,” said Trench.

When introduced, Scott Reynolds explained that, “Back in 2001 after 911, we had a discussion at the end of the year about NOT sending out our usual gifts to clients, but rather making a donation to the victims of 911. We sent a letter to our clients and shared our decision and we received tremendous support. Some of our clients followed suit and gave to the 911 victims as well, while others chose to give to local charities that they cared about.“

“Over the years we continued to make year-end donations to local charities. We realized that sometimes when the end of the year came around we were in a crunch and didn’t always know the most urgent needs of the community,” noted Scott. Tyler had joined The Community Foundation on the Professional Advisory Council. “Tyler suggested a Donor Advised Fund at The Community Foundation. We could put the funds into the account and disburse them throughout the year when the needs arose,” said Reynolds.