Will County, IL (August 30, 2013) – The Will County Community Foundation honored two families during the 2013 Donor Recognition and Celebration of Philanthropy on August 14. The award is presented each year to those who provide philanthropic leadership for the benefit of the community and beyond. Donors and guests gathered at the Barber & Oberwortmann Horticulture Center to recognize Kathy & Tom Cawley and The Spesia Family for their commitment to the Foundation and to celebrate the spirit of giving in Will County.

Board Chair, Br. James Gaffney, FSC welcomed guests and introduced the Spesia Family. Lori and Doug Spesia instilled the spirit of philanthropy in their children-John, Chris, David and Sarah- through their strong Catholic faith and daily example. Doug Spesia was a founding Trustee of The Will County Community Foundation. He and Lori set up one of the Foundation’s first Donor Advised Funds. Their sons, John and Chris, along with their wives followed in their footsteps by establishing their own Funds. When Doug passed away three years ago, their son Chris took Doug’s place on the Board and has grown into his own valuable role. But the Spesia family has done more than just help the Foundation. Their philanthropic spirit, financial resources, time and talent have been shared widely and have touched organizations that they value like Daybreak Center and Catholic Charities, Joliet Montessori School, The George Werden Buck Boys & Girls Club, local parishes, a Benedictine Monastery, and local Catholic education institutions. 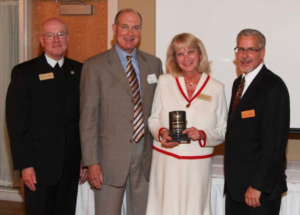 Lori Spesia spoke on behalf of the family and shared how she was able to use their Fund to achieve what her son Chris said, “Was a dream she didn’t know she had yet.” Lori and Doug were moved when they visited Malawi Africa on a mission trip and eventually met what Lori likes to refer to as “her fifth Spesia child,” Father Philip Mbeta, a Catholic priest from Malawi. As their friendship grew with Father Philip, they became interested in helping him with his work. When Doug passed, memorial gifts were made to their Fund at the Foundation. Lori felt that Doug would want to use these gifts to support Father Philip’s work. She was able to make grants to a local parish that, in turn, directed the funds to help build a Montessori school in a village in Malawi in Doug’s honor. The adult Spesia children initiated their own projects to help the local people as well. John spearheaded a fresh water initiative and, with the help of our local Rotary Clubs, built drinking wells close to the village. The Spesia children and grandchildren have been taking turns going to Malawi with Lori as they continue to support Father Philip and his work

Executive Director, Michael Trench introduced Tom and Kathy Cawley who both began their careers in education. With a shift to the financial advising field, they established The Voyager Group in 1999, which resides in a restored 1840’s farmhouse near Essington and Division in Joliet. This physical setting says a lot about the values that drive them. Serving clients from a historic building reminiscent of a time when communities drew strength from coming together and neighbors helped neighbors. “We like to think of our clients as family because we have worked with them for so long,” said Kathy. 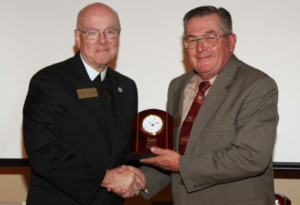 Kathy and Tom had been looking for a way to give back locally and they felt that the Foundation was a place where they could impact community needs. Kathy came onto the Foundation’s Board and sits on the Grants committee. When Tom and Kathy started a Fund at the Foundation, they did it in the name of their business. And it wasn’t just a good financial decision for them to organize their charitable giving, but reflected the spirit of their values, and again true to their spirit, it became an opportunity to educate. They set up an Advisory council of clients with similar values, to explore together issues of concern in the community, discuss solutions and use The Voyager Group Fund to address them. This Advisory council has come together around the issue of wanting to improve the quality of life for young people in the community. “We are just getting started, but even small contributions to the Fund over a long period of time will add up,” Said Kathy.

Michael Trench updated the guests with a “State of the Foundation” presentation. “The Foundation is a non-profit charitable organization that makes it possible for individual donors to establish a charitable legacy to achieve their own personal charitable intent, and for a wide range of donors to help build permanent endowments to meet local needs,” said Trench. He also discussed the Foundation’s role in grant making in the community.

Chairman, Brother James Gaffney, FSC recognized Dennis Tonelli of Plainfield, Michael Hennessy of Joliet and John Weitendor, Jr. of Wilmington for their seven years of service on the board, as they will be stepping down. Each played a valuable role in establishing the Foundation and Dennis served three years as Board Chairman. They will be missed. For more information regarding The Will County Community Foundation visit www.willcountycf.org or reach Michael Trench, the Executive Director at (815) 744-9223.